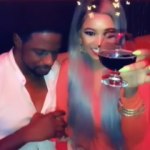 It has been a tough day for once loved couple Natalie Tewa and Rnaze who have hit trending lists following their ugly break up. The two former lovers, who used to have a very popular blog, ended up airing their dirt online after Tewa cheated on him while he was in Uganda. Since then, it has been drama after drama as the two try to prove to fans they are innocent. Well, with such a day, you might need to catch a break, especially if your birthday is around the corner. Rnaze recently hooked up with Vera Sidika, who he shared is a long time friend, to unwind and celebrate his 30th birthday. Fisi Vera has just gotten back from the states and did her first show at XMillionaires club in Nairobi. Vera and Rnaze enjoyed the view of naked strippers while catching up but just to be fair, we now Vera is a fisi and she has been waiting for such a moment. Watch them below:

2019-03-29
Previous Post: Tanasha responds to leaked conversations amid Diamond’s cheating allegations
Next Post: Bahati’s baby mama exposes Bahati yet again: I was so pale with almost 30kgs down because I wasn’t eating