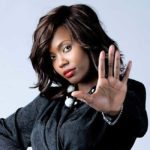 Social media is full of all sorts of ´life advisers´ and Kenyan sensational songbird, Sanaipei Tande has now fallen victim. The former radio queen recently attended an event, looking all glammed up but to her disbelief, what she received was trash. The 32-year old singer shares a photo; make-up on, sexxy smile and titties pushed up but, according to fans, it was all a wardrobe fail! Captioned ¨I AM THE WHITE WALKER😎¨ might have been a miss! Critics on social media felt her brassiere was too small-too tight, her clean-up undone and her make-up done overboard. According to ´social media advisers´ she was looking like a mess. Backlash Waaaa anapumua kweli 😂😂😂 d.u.a.i.n.e Ile kufinywa zimefinywa zingekua na mdomo zinger gear😂😂😂 the_legendary_chris Too much makeup. Nyoa makwapa, get a bra cup ur size vasco_king Ul suffocate them soldiers trizzahg You are literally bursting outta ur seams ruwaidha_ibrahim But who is she? Radio personality, Sanaipei Tande soldiers on and leaves her critics, blue-ticked.