Diamond Platnumz’ dad: I have never met my grand kids, I don’t even know how Zari sounds 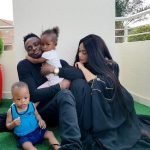 Zari Hassan and her two kids from Diamond Platnumz have never met Diamond’s dad in person. Despite Zari and Diamond being together for close to five years, Diamond has never bothered to introduce them to his dad Mzee Juma. Juma recently opened up about the issue saying that he doesn’t even know Zari’s voice because they have never met face to face. ”aah!sijai ona wajukuu wangu ata sauti yake zari sijawai sikia” he said.  Never meet Zari was Diamonds ex and they had two kids namely Tiffany and Nillian. It’s not a secret Diamond and his dad never see eye to eye. Diamond has been dodging his dad for years now and it’s not shocking that he has never met his kids. The day Mzee Juma planned to pay them a visit, Diamond had gone for a music tour, denying him a chance to see his grandchildren.

The post Diamond Platnumz’ dad: I have never met my grand kids, I don’t even know how Zari sounds appeared first on Ghafla! Kenya.

2019-04-16
Previous Post: Diamond Platinumz and Bahati to work on collabo but under one condition
Next Post: Ati Matthew 6:35! Kenyans react to Ruto’s non-existent Bible verse