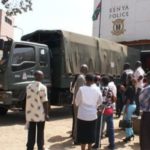 Police in Kobujoi Police Station, Nandi County are under pressure trying to figure out how thieves broke into a police station and made away with guns and ammunition as they were glued to highly anticipated game. According to a Police report, officers on duty had abandoned the post and gone to watch UEFA Champions League matches at a nearby shopping centre only to comeback and find the amorry room broken into and the guns stolen. UEFA game The APs are attached to Kamorwon AP post some 19 kilometers east of Kobujoi Police Station. They reportedly left the post at 7 pm to catch the Uefa Champions League match between Barcelona and Manchester United which started at 10 pm. “All the officers left the post and went to watch UEFA football match at the nearby trading centre and on returning to the post, they noticed the room of the in-charge which is also used as an armoury in which the steel box is kept was broken,” the police report reads. The thugs stole three G3 rifles: G3 FMP 77095029, G3 FMP 7709443 and G3 A3 F91879. They also made away with a magazine of 20 rounds of ammunition. They left behind only two magazines with 17 and 20 rounds.

2019-04-18
Previous Post: ‘It is easy for me,’ Akothee explains why she wants to do gospel music
Next Post: ¨Love you baba Jibby, Iffy, Kikky¨ Citizen TV´s Lulu Hassan adores father to her 3 adorable boys, on his birthday