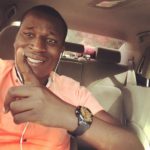 Anerlisa Muigai is officially set to be Ben Pol´s prospective wife after his surprise proposal just yesterday but blogger, Cyprian Nyakundi is here to tell him off. According to the brutal misogynist, Ben Pol is in this love affair with Anerlisa, just to harvest her money, then walk home single.   On his Twitter account, Cyprian articulates: Ben Pol is in Business, before the relationship ends he will have a stake at Keroche. Boy Child ako kazi…..Mapenzi ni wewe. The popular Kenyan blogger further dissed the Tanzanian land that might house couple of beauties but whose economy is a wreck. Tanzania is home to beauties but guess what the Kenyan shilling is stronger. Cyprian advises Anerlisa to prep up for her untimely breakup that will have greater mass than Mozambique´s catastrophic Cyclone Kenneth. Girl Child atapewa heart break kubwa kushinda Cyclone Kenneth.😂😂😂 Being an individual in Kenya´s history, known to rub shoulders with ladies of all status, age and capacity, Cyprian strongly condemns the act of gents going down on one knee, all in the name of ¨proposals¨: Ben Pol proposal to Anerlisa Muigai shouldn’t be news, this is the epitome of mediocrity. BoyChild shall NEVER bow nor kneel down to any woman whether she is a billionaire, governor or a queen. He fires at Tanzania´s Ben Pol urging him to pick a leaf from the ´legendary´ Kenyan men: It’s good this guy is a Tanzanian, Kenyan men are woke! Piga magoti tu na mutaachana Well, it would be advisable at this juncture to keep off this guy´s [Cyprian] eye view before he dismantles your entire being. He can totally rip off one´s spirit.