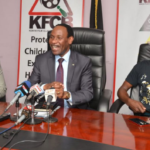 “Taka Taka” singer Alvindo has been trending ever since  regulatory board KFCB banned his song. Alvindo met with the CEO of the body Ezekiel Mutua a week ago and they ironed everything out, agreeing that the video of Taka Taka shall be pulled down. In the press conference, Alvindo also promised that his next music shall be educative and uplifting. After Taka Taka, the singer dropped “Kunguni”, a club hit that brought about mixed reaction. “I want to apologize to my fans and to promise them a second release that will embrace moral values… I am sorry I didn’t intend to incite jilted men against women. “If I release the next song, it will be a song with a message and one that sends a positive message to society,” said Alvindo last Thursday. Educative He has now released his new jam dubbed  ‘Boy Child’ which speaks about all the difficult things boy child is going through these days. ‘Boychild’ has been produced by Magix Enga at the Fast Cash Music Group studios run by KRG the Don, who took Alvindo under his wing after ‘Taka Taka’ went viral. Listen to the song below: