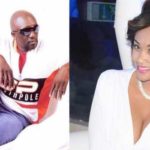 Rasta Rob MC has been a household name for the 90´s teens and now reveals that he is behind Zari Hassan´s growth while she was still green ´in the field´. The teens of today may not augur well with the name neither even have a clue of who that is but well…we are about to find out. Robert Ogwal as his real name, is one of the biggest names in the Ugandan land. He however later flew abroad to the Queen´s land. Away from that, Rasta Rob alleges that he dug Zari Hassan out of the ´rural´ to the city while she was still green, young, cute and succulent. Back in the days In an exclusive interview, the UK-based Ugandan recalls how he met Zari in 1995 at Jinja, Uganda. I met Zari around 1995. I was still at Sanyu at the time. I also worked with Soul Disco as DJ. Soul Disco used to play at Botanical Beach every Sunday. However, we were often hired by local promoters who used to host parties at Jinja Sailing Club. Further on, as cited by Uganda´s Big Eye, the retired radio personality reveals: It is here where I met Zari. She was among the girls who always came for the disco. Zari was in her teens… about 18 and extremely beautiful. She used to come to me, requesting for songs and it is here that I used my chance. While still in her teenage, Zari Hassan got the chance to explore the world from a bigger lens before she could tame her wild side. I got her from Jinja and brought her to Kampala with me. However, she became very wild on getting to Kampala….. Jumping around with every man. I finally let go but she was my girlfriend for 3 years….

The post Legendary Ugandan DJ reveals finer details on how he unearthed Zari Hassan from the ´rural´ appeared first on Ghafla! Kenya.