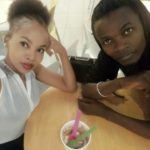 Actress Brenda Wairimu has finally confessed that she is seeing someone after three years of staying single since her break up with singer Juliani. Though the two still co-parent, Brenda has taken long to move on because she was focusing on her child after the break up. Rumors at first pointed out that Brenda was dating actor turned photographer Ephy Saint though she has come out to deny the allegations. “I am not dating Ephy Saint but I am dating again.” she said in an interview with Kiss 100.  Dating again Brenda recently revealed that she’s learning how to date again after her break up. “Being single is well…different. I was in a serious relationship for 8 years, if not more. I am slowly learning to date again but not sure when I will be ready for something serious. I have not been on a date lately (laughs),” she said in interview with Pulser.

The post Brenda Wairimu confesses she dating again but it’s not with Ephy Saint appeared first on Ghafla! Kenya.